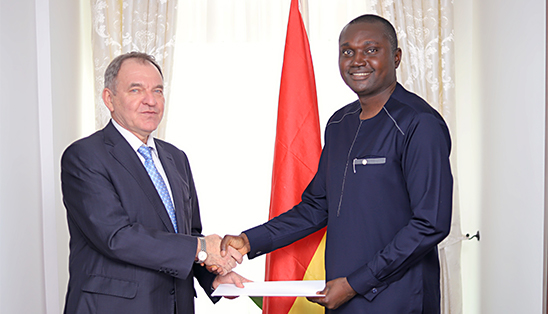 Hon. Owiredu welcomed the Ambassador-designate and congratulated him on his nomination to the esteemed office of an Ambassador. He intimated that both countries had enjoyed long standing bilateral relations, which he hoped would be further strengthened. He further indicated that the government of Ghana sought to create a peaceful investment climate to promote investment between the two countries, adding that Ghana looked forward to deepening cooperation in the areas of education, commerce and military. He assured H. E. Aleksandruk of the Ministry’s support to his office.

On his part, H. E. Dr. Valerii Aleksandruk intimated the commitment of his government to boost relations with Ghana, stating that currently, over two thousand (2000) Ghanaian students were studying in Ukraine. He also called for enhanced cooperation through the signing of agreements in the areas of education, military and trade and commerce.