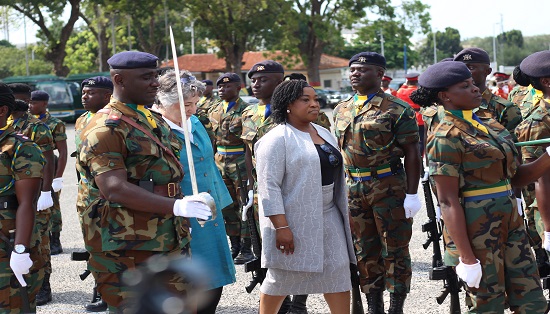 A flag-raising ceremony has been organised by the Ministry of Foreign Affairs and Regional Integration to climax activities marking the 73rd United Nations Day which fell on Wednesday, October 24, 2018.

The ceremony was held at the Forecourt of the State House on the theme “Making the United Nations relevant to all people: Global Leadership and Shared responsibilities for peaceful, equitable and sustainable societies”.

The Minister for Foreign Affairs and Regional Integration, Hon. Shirley Ayorkor Botchwey hoisted the Ghana flag while the flag of the United Nations was raised by the United Nations Resident Coordinator, Ms. Christie Evans-Klock.

In an address, Hon. Botchwey commended the United Nations for “always providing the biggest platform for the teeming majority of progressive nations in the world, both rich and poor, large and small, developed and under developed, to reach out to one another and to build bridges towards creating common conditions for the respect of human rights, rule of law, the deepening of democracy and good governance and the attainment of social equality, social justice and better standards of living for all”.

The Minister noted that the UN has made significant progress in promoting sustainable development and prosperity in the world. She lauded the UN for setting up common standards and goals to guide the efforts of its members states in their quest to better the lives of their people.

She indicated that the seventeen (17) Sustainable Development Goals (SDGs) and the one hundred and sixty-nine (169) targets adopted by the UN, which are aimed at shaping the development agenda of the world was achievable if all stakeholders give it their fullest attention.

She stated that Ghana was in full support of the SDGs and has accordingly integrated them into the country’s vision and budget. She added that the UN goals and targets adopted by the country would help promote economic growth, and holistic development.

The Minister further indicated that the Government was implementing policies which would create sustainable opportunities to improve the lives of citizens as well as ensure that they live in dignity, peace and harmony. She cited the Free Senior High School programme, and Planting for Food and Jobs as some of these policies.

She pointed out that the developmental goals set by the UN cannot be fully achieved if there was conflict and insecurity in parts of the world. She urged the international community and leaders of member states to appropriately empower and allow the UN to work and promote growth and prosperity throughout the world.

Hon. Botchwey added that “multilateralism remains the pre-requisite and essential condition for resolving global challenges on peace, security and economic development”, and urged all stakeholders to work to promote peaceful societies and harmony in their various communities.

She commended the National Organising Committee for the UN Day for choosing the sub theme; “Mr. Kofi Annan, the legacy of an illustrious son of Ghana and a Global Statesman” and added that it was appropriate for the occasion.

She used the occasion to reaffirm Ghana’s commitment to the ideals and principles of the UN and pledged that the country would continue to play a significant role in peacekeeping with the constraints of it resources to promote peace and security throughout the world.

In her remarks, Ms. Christie Evans-Klock, thanked Ghana for her continuous leadership in the United Nations as well as supporting the aspirations embodied in the UN Charter. She commended His Excellency President Nana Addo Dankwa Akufo-Addo for agreeing to continue to chair the Secretary–General’s Group of Eminent Advocates for the SDGs for another two-year term.

Ms.  Evans-Klock intimated that, Ghana and the UN have jointly signed the UN Sustainable Development Partnership, which is a 5-year framework to guide the UN’s support to the national development efforts through 2022.

She said the partnership framework aligns with the Coordinated Programme of Economic and Social Development Policies, 2017-2024(CPESDP), which sets the vision for agricultural modernisation, industrial diversification and youth employment. She said “this vision for national development incorporates Ghana’s global development commitments, including the 2030 Agenda for Sustainable Development, the Africa Union’s Agenda 2063 and the Paris Agreement on climate change”.

She added that the partnership has set out five strategic results areas namely, prosperity, people, planet, peace and partnership. These she said align closely with components of the 2030 Agenda for Sustainable Development.

The UN Resident Coordinator further indicated that the partnership reflects two commitments which firstly signifies the nature and work of the UN as a partner with Ghana rather than provision of assistance or aid, which is appropriate for Ghana as a rising middle-income country with a strong vision for self-reliant development. Secondly, it focuses on UN interventions on the shared commitment to meet the Sustainable Development Goals.

She pointed out that the UN General Assembly in May this year, adopted a Resolution on Repositioning the UN Development system to make it more fit for the purpose of helping member states achieve the Sustainable Development Goals(SDGs). She added that the reforms underscore the role of UN Country Teams to continue to champion human rights approaches in their support for the achievement of SDGs.

The President of the Ghana United Nations Students and Youth Association (GUNSA), Mr. Kwashie Klu-Duvor  took his turn to acknowledge the progress  Ghana has made in the area of maternal and infant health. He acknowledged the role played by late former UN Secretary-General Kofi Annan  in coming out with the SDGs.

He called for the need to step up efforts in areas of provision of potable drinking water, energy and the eco-system. He emphasized the importance of the youth in national and international development and called on the youth to use dialogue to address their concerns and not resort to the use of violence. He pledged that GUNSA would continue to play its role in promoting national development.