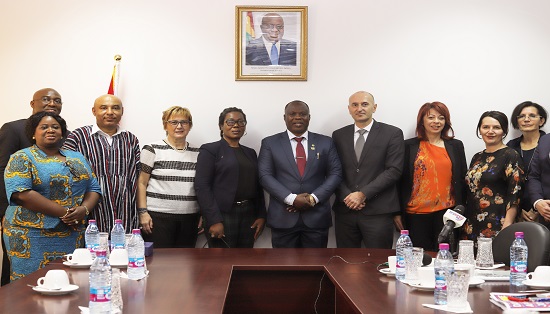 The Deputy Minister for Foreign Affairs and Regional Integration, Hon. Mohammad Habibu Tijani (MP), has indicated that Ghana would enhance her economic relations with Slovenia for the mutual benefit of the two countries.
Hon. Tijani made this known when the State Secretary of the Ministry of Foreign Affairs of the Republic of Slovenia, Mr. Dobran Božič
and a 14 member Slovenia delegation paid a courtesy on him on Tuesday, November 27, 1018.
In his remarks, Hon. Tijani recalled the strong bonds between the two countries which date back to the friendship between Ghana’s first President Dr. Kwame Nkrumah and Josip Broz Tito, former leader of Yugoslavia which led to the establishment of relations between Ghana and Slovenia after the latter attained independence from Yugoslavia in 1991.
The Deputy Minister urged Slovenia to establish an Embassy in Ghana to help to further enhance the bilateral relations between the two countries and added that his visit to Slovenia during the year was very beneficial.
He indicated that economic diplomacy was one of the key foreign policy areas of the country and for that reason, the Ministry was working to make significant process in that area. He stated that government had introduced initiatives such as the “One District One Factory”, “One village One Dam”, Planting for Food and Jobs” and the “Free Senior High School” programmes to help accelerate the development of the country.
Hon. Tijani also informed the delegation that Ghana had one of the fastest growing economies in Africa, was peaceful and was a good place to invest. He said measures such as the digitization of the economy through e-business registration and a national identification card system had been put in place to enhance development.
The Deputy Minister urged members of Slovenian delegation with specialities in food processing, pharmaceuticals, health care and security printing to establish factories in Ghana as these would help generate employment in the country. He also encouraged the Slovenian delegation to interact with Ghanaian businesses to solidify the growing economies of the two countries.
For his part, the State Secretary of the Ministry of Foreign Affairs of the Republic of Slovenia, Mr. Dobran Božič said his country was happy to enhance both political and economic relations with Ghana.
He indicated that his country would want to partner Ghana in the areas of e-governance, digitization and education among others. He added that the delegation would also focus on cooperation with small and medium enterprises.